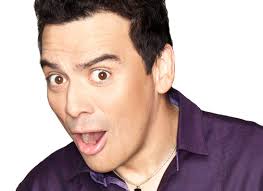 Mencia began his career doing stand-up on amateur night at the comedy club, Laugh Factory. He later showcased at The Comedy Store and became a regular, performing nightly. After he found success on the L.A comedy circuit, Mencia was named “International

Comedy Grand Champion” from Buscando Estrellas (the Latino version of Star Search). This led to appearances on “In Living Color,” “The Arsenio Hall Show,” “Moesha” and “An Evening at the Improv.” In 1994, he hosted the HBO comedy series “Loco Slam” and in 1998 he hosted “Funny is Funny!” on Galavision. Mencia released a comedy album in 2000 called “Take a Joke, America” that showcased his brand of humor.

Phil talks to Carlos about his continued journey through the comedy world and his struggles with the world of entertainment.