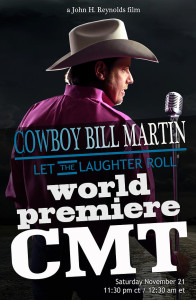 William Lee “Cowboy Bill” Martin was born on May 21, 1966 to parents Donia and David Martin, in a little town called Blue Mound just north of Fort Worth, Texas.

The youngest of four kids, not everyone was happy to see his arrival. As the story goes, his oldest brother “Bubba” (yes, a real nickname) was in the middle of his 7th birthday party when his mother’s water broke, putting an end to the festivities. When asked how he felt about getting a new baby brother Bubba said, “He ruined my 7th birthday party. I hate him.”

His sister “Sissy” and his other brother “Skeeter” (yes, also both real nicknames) were not interviewed that day. However, Skeeter eventually gave young William his first nickname, “Wee Wee.” And no, it has nothing to do with any man parts. Skeeter just couldn’t say the name William Lee. But it was young William’s grandfather, Pappaw Bill, who first called him “Cowboy”.

Growing up, Bill really thought he was either going to play shortstop for the Texas Rangers for a living, or was going to be a singer (or at least play the drums). Every night he would play to sold-out auditoriums and stadiums. Okay, the venue was just his bedroom and he would be playing to stuffed animals, G.I. Joe’s, and Pepe Le Pew, the family’s pet skunk. (Seriously, he and Skeeter had a real live pet skunk that their Uncle Kayro gave them and yes, the stinker had been removed.)

Bill’s love for music and performing came from his mother, a talented singer. He got the bug for show business at the age of five. Every Sunday night found him at the First Evangelical Methodist Church, either singing solo or with Skeeter and Andy Hoover (his best friend growing up, who is now Dr. Andy Hoover), the cherished HYMN NO. 316 THE OLD RUGGED CROSS.