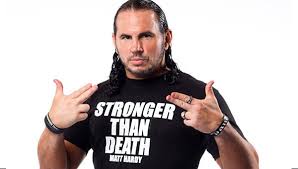 Q: What is your favorite match ?
A: Singles match: Me vs. Edge Cage Match (WWE Unforgiven)
Tag Team: The 1st ever tag team ladder match at (WWE No Mercy)

Q: What are your favorite bands ?
A: Pearl Jam, Kings of Leon, Tool, A Perfect Circle & Public Enemy, to name a few …

Apart from his success as a tag team wrestler, Matt Hardy’s achievements as a WWE singles competitor include the ECW Championship, Hardcore, European, Cruiserweight & United States Championship, winning each on one occasion before leaving the company in 2010. In 2011 Matt signed with TNA & rejoined his brother professionally for a brief time. Matt has appeared in television commercials for Chef Boyardee & Zelda and on television programs including, not but limited to That 70s Show, Scare Tactics & Fear Factor, where he was named the Fear Factor Champion. Hardy is also a New York Times bestselling author for his book “The Hardy Boyz: Exist 2 Inspire”.